ince early on I'd felt that pink was the right colour for my Vicky Twenty (so named and gender-reassigned by Rob, designer of the board). I've been undecided about the case. One option was to design a perspex enclosure, with transparent top / opaque pink keyboard bezel. Another is to spray an original case. I went for the latter to remain in keeping with the classic breadbin design, and used the most blotchily-yellowed of the cases I have.

Badges, stickers and feet removed, case scrubbed. The paint is Plastikote satin cameo pink. The can doesn't mention primer so after a test on the inside, here goes: 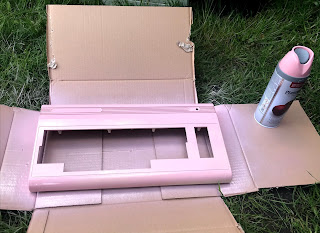 Several thin coats later, here we are reassembling her. Internal SD2IEC fitted and slot cut in the case. I'd love to tell my teenage self that I'd be fitting a storage device into a Vic that stores gigabytes on a thin card around an inch square. 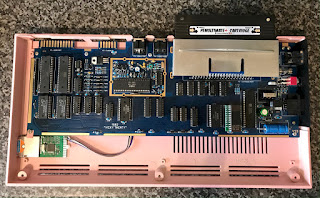 No-one needs to see more pictures of keys being scrubbed. In this case I stripped the keyboard to clean the pcb contacts and rub the conductive pads with soft pencil, as some of the keys on this particular keyboard were a bit difficult. 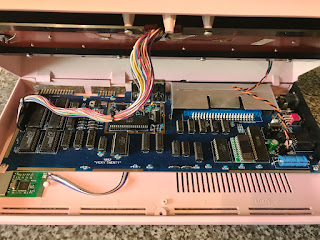 Note the pink LED, it's not as searing as it appears in the photos. 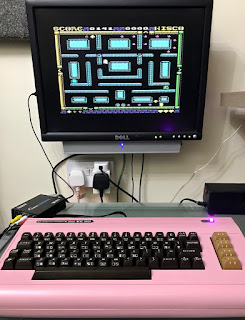 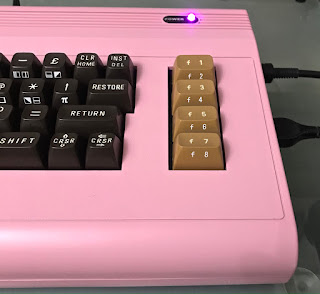 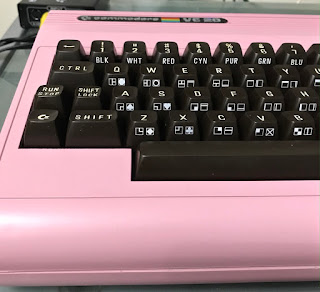 original feet and badges replaced. I have the silver serial number sticker from this case, removed without damaging it, but I'm not putting it back on because I feel the serial number and other information relates to the  computer that the case used to be part of. (It does say 'made in England' though which is still true for Vicky.) 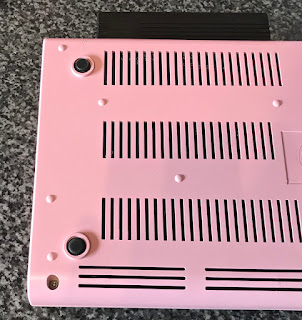 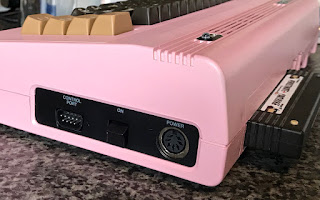 I love the finish. I can taste strawberry milkshake when I look at it. It really looks like pink injection-moulded plastic. I had intended to buy a C64 white keyboard (the one with the graphics on the front of the keys) because I thought it would go better with the pink, but I now like the brown keys very much. They're original Vic stylee, they match the badges and penultimate cart.

Popular posts from this blog

May 08, 2021
M y Vicky Twenty is *very* nearly complete.  As things stand, the board and every single component is new. The processor and VIAs are newly-manufactured (W65C02 and W65C22).  Obviously the Vic1 chip isn't manufactured today, but there is 'new old' stock about. I have been able to buy a Vic 1, date code 1987 (which seems very late). It obviously hasn't been in a computer before, passes the acetone test and works. The same goes for two of the ROMs - character and BASIC. But I haven't been able to buy a new-old Kernal ROM (901486-07). I am able to borrow one - all of the boards I have, have this particular ROM socketed. I don't know whether all of this indicates that the Kernal has proved less reliable than the other two. I recently bought a TL866 for another project. Of all the retro-computing hardware things I've had to learn to do, making ROMs has been one of the simplest. So far, everything has been very easy and worked first time.  I'm not sure that it
2 comments
Read more

April 19, 2021
T his isn't perfect but it's getting better. I've made a way to convert my own music to a cut-down MIDI format that my driver reads and plays. The sound here is being captured from a real Vic and it doesn't sound bad. [update 21 Apr 21] I've updated the video embedded above. I did more work on my driver and ironed out some problems with the timing. As a result it sounds way more solid. I've also added a little percussion using the fourth (noise) channel of the VIC chip. As before, the sound is captured from a real Vic. This music is for my Yvonne game (still in progress).
Post a Comment
Read more